The long-awaited language camp in Torshälla, Sweden, was back 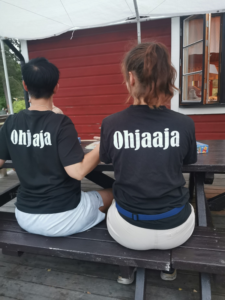 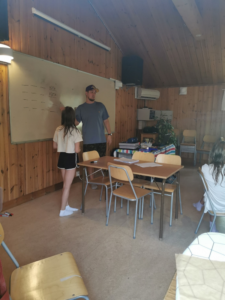 The language camp for children and young people that had been canceled several times because of the pandemic, could again be organized in Torshälla, Eskilstuna, on the weekend between August 19 and 21. A total of 35 children and nearly 20 tutors took part in the language camp. Luckily, the weather was favorable to the camp again this year, and we were able to fully enjoy being outdoors without a drop of rain!

The cornerstone of the language camp is creating a positive experience with the Finnish language and to provide opportunities for speaking Finnish while having fun. In the camp, we use both Finnish and Swedish so that no one feels excluded, regardless of their language skills.

The language camp’s activities included swimming, sauna, crafting, board games, sports, fishing, playing and a super-popular rap workshop with rapper Jesse P. In the workshop, the camp participants had the chance to try out rhyming rap lyrics in the language of their choice. And indeed a lot of great rap songs were born in the camp!
The highlight of the evening program was the karaoke disco, where many young people dared to take the microphone and sing! The camp’s mouthwatering menu consisted of a number of Finnish dishes, such as minced meat soup, macaroni casserole and grilled sausages.

The camp was successful in all respects and both the organizers, tutors and the young participants are looking forward to next year’s language camp.