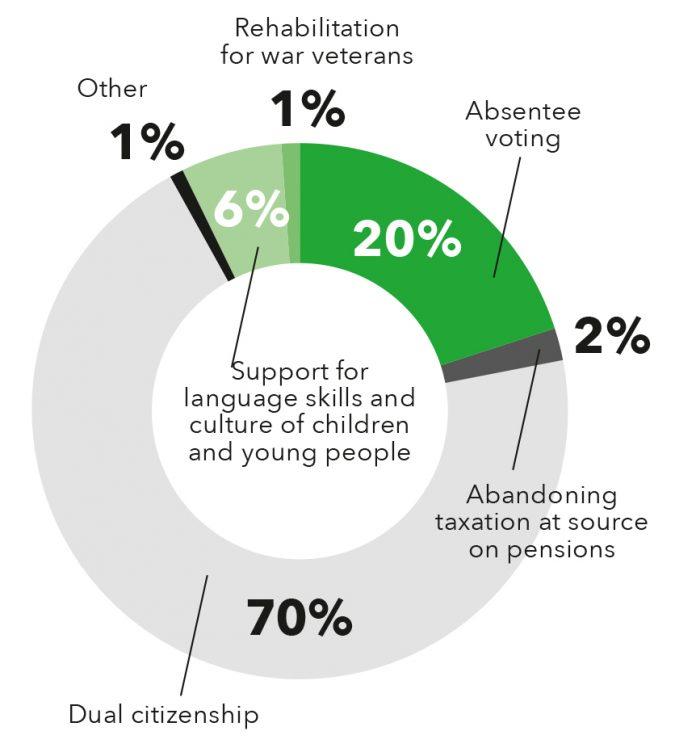 We asked expatriate Finns what they considered to be the greatest achievement of the Finnish Expatriate Parliament (FEP). According to a vast majority (70%) of respondents, dual citizenship, which took effect in 2003, is the FEP’s most significant achievement.

The inquiry received 86 responses. : A fifth of them (20%) of them said that the FEPs most significant achievement is absentee voting by mail for Finns abroad. The change in the election law was approved by the Finnish Parliament in 2017 and used for the first time in the parliamentary elections 2019.

Six percent of the respondents considered support for expatriate children’s language skills and culture to be the FEP’s most important achievement.

Most of the respondents lived in Europe. The inquiry received second most responses from the so-called ‘old’ migrant countries: the United States, Canada and Australia. A clear majority of the respondents (82%) had lived overseas more than 15 years, while 11% had lived abroad for 11-15 years.

The inquiry received a lot of informal response which emphasized pride for Finnishness, delight for one’s own and family’s Finnish language and culture as well as a strong, trans-generational connection with Finland. According to feedback, the FEP’s achievements have affected respondents’ own or their family members’ lives.

“I have two children who are dual citizens. Therefore I consider support for Suomi Schools to be a really significant achievement!”

“It was important for me to be able to hold onto my Finnish citizenship when I applied for US citizenship. My three children are all dual citizens and keep in touch with Finland. My son studied at Helsinki University as a Finnish citizen.”

“I’m proud to be a citizen of the two best countries in the world and proud of my Finnish heritage!”

“[Absentee voting] has helped me a lot, since I have a three-hour train trip to the closest voting place and tickets are expensive. The Finnish Expatriate Parliament has worked hard for this change, not to mention other law proposals.”

“It makes it easier to travel between my present home country and Europe, makes it possible to manage investments better in the eurozone and gives my children an option to study in Finland or in the rest of the EU. One of my children has done his military service in Finland as a volunteer and it was a good experience.”

The inquiry ‘What is the Finnish Expatriate Parliament’s greatest achievement?’ was conducted digitally between March 3 and April 15, 2020. The Finland Society extends warm thanks to all respondents!