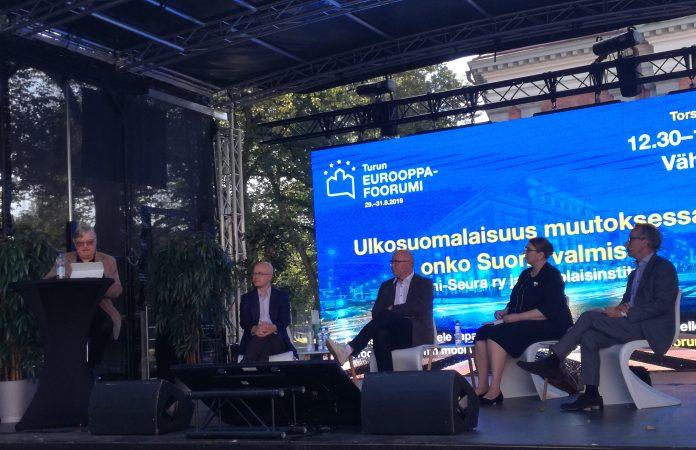 Finns around the world need their own ombudsman, returnees have to be welcomed back to Finland, we need to invest on the Finnish language and culture worldwide and support the Finnish school network outside our borders.

Matters concerning Finns abroad were the main topic in a paneldiscussion held as a part of the Europe Forum in Turku on Thursday 29 August, 2019. Expatriate in change – is Finland ready? was the big question and the panelists agreed that Finland is not ready enough for the changing nature of expatriatism. Futhermore, the Finns abroad are an unutilised resource for Finland.

More information on the Europe Forum in Turku: http://www.europeforum.fi/en/node/210997

There are approximately 300 000 expatriate Finnish citizens around the world and around 2 million people with Finnish backgroud. In 2018, 19 148 people moved from Finland, 60% of these were Finnish citizens. Most popular destinations were Sweden, Great Britain, Germany, USA and Spain.

Take a look at our brochure

With Finnish Sisu and Soul (in Finnish) Part 10: Dallas, USA